“The early bird may get the worm, but its the second mouse that gets the cheese.”
~Jeremy Paxman

At the age of 18, I started to love the previously despised spinach and began hating theme parks.  This trip did not change my opinion of Mickey and his band of wallet raiding rodents.

I’m a member of the ever so small silent minority that doesn’t think Disney World, Universal Studios and everything Orlando is the epitome of what a vacation should be.  But what the hell, Roxanne and I were driving by the city that Mickey built so we decided to stop in.

Arriving in the afternoon we delayed our trip to the theme parks and headed over to BB King’s restaurant for some good food and some excellent music.  The BB King All Stars took the stage with an eight piece band that entertained everybody by playing classic blues. Whenever I see a group of talented musicians I am often reminded of the imbalance between pay and skill when you are an artist.  Only the top few make a fortune.  One tier down, the extremely talented, manage to scratch out a living.  If you fall below that level, you can teach or start a wedding band. 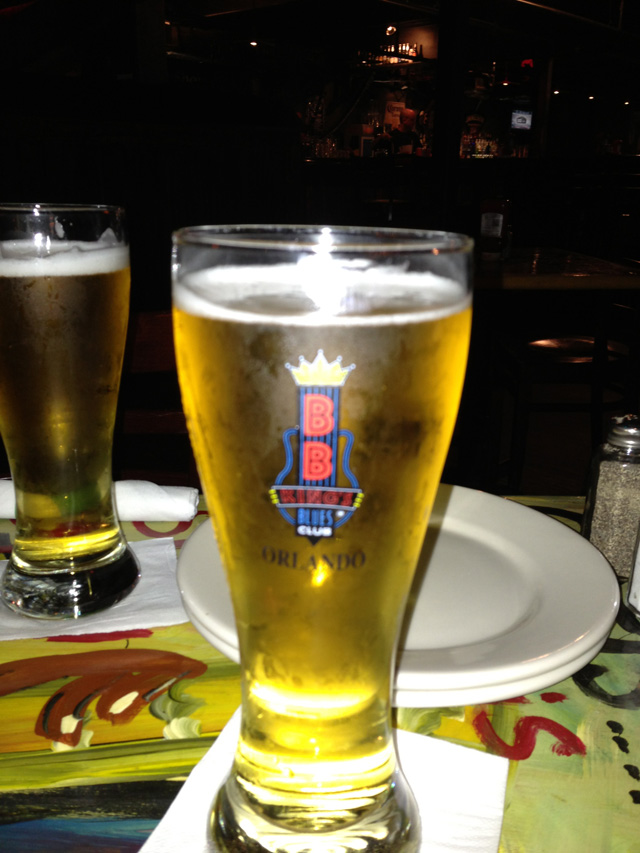 Bright and early, I took out a $100 bill from my card wallet and then made our way through the gates of Universal Studios.

Everything is overpriced but the parks are full of people so it’s hard to blame a business for charging prices that hordes of customers are willing to pay.  The place is spotless, and the architecture within the parks is nothing short of impressive.  The Harry Potter section of the park was especially remarkable.

I’m not sure where we were, but somehow we found a bar that was inside of a giant fake tree.  I asked the bartender what she thought of the crowds in the park today, she asked, “Did you get trampled?”

I replied, “It’s a bit crowded but not once did I get trampled.”

She looked back at me and grinned, “Then it’s a very light day crowd wise.”

Even with the very short lines at the rides and being able to move about with relative ease, I just can’t seem to understand the attraction to these places.

As I strolled through different themed sections of the park, it dawned on me somewhere between the Lost World and Dr. Seuss’s Wacky World, that my problem with these parks is, that nothing is real.  The original is always better than the copy, non-alcoholic beer should only be consumed by those with hepatitis-c and technologically enhanced breasts don’t compare to the ones that nature makes.

The real world is just much more interesting to me.  So we put Orlando in our rear view mirror, for the last time I’m sure, and headed for Jacksonville to visit family.