We left Apalachicola early Sunday morning headed for Carrabelle, FL. From Carrabelle we will wait for a good weather window to make a Gulf crossing over to Steinhatchee, FL.

We average 5 knots in speed so the crossing from Carrabelle to Steinchatchee will take 12-14 hours. We will have to be patient and wait for not just good weather but the right winds to help push us along in the direction we want to go.

It was a beautiful morning in Apalachicola as we crossed the bay so I chose my seat on the bow to keep an eye out for dolphins. 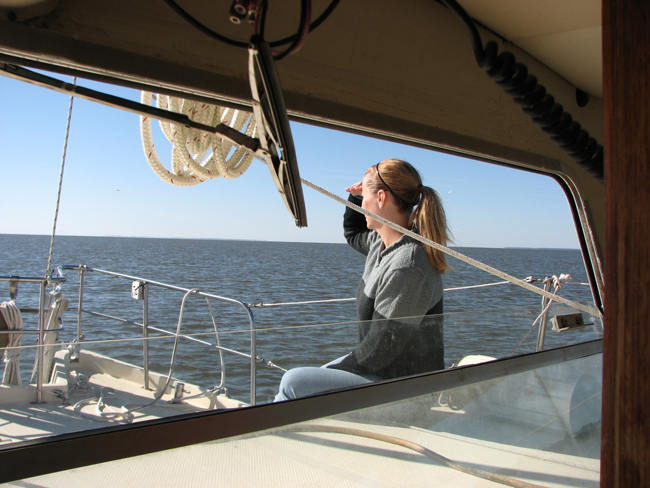 No dolphins, but we did get to watch several oysterman in action as they raked up oysters and pulled in their load. From there they will be sorted and the small ones tossed back. 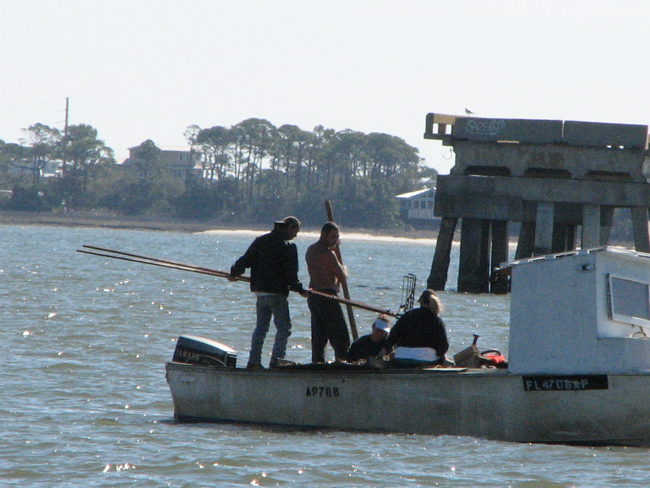 We arrived at C-Quarters Marina early in the afternoon. We were greeted by a very friendly staff and a few locals.

We weren’t tied up long before Logan put her kayak in the water in search for a hermit crab. She bought empty shells in Apalachicola just for this occasion. She will search out the hermit crab that is most in need of a new shell. 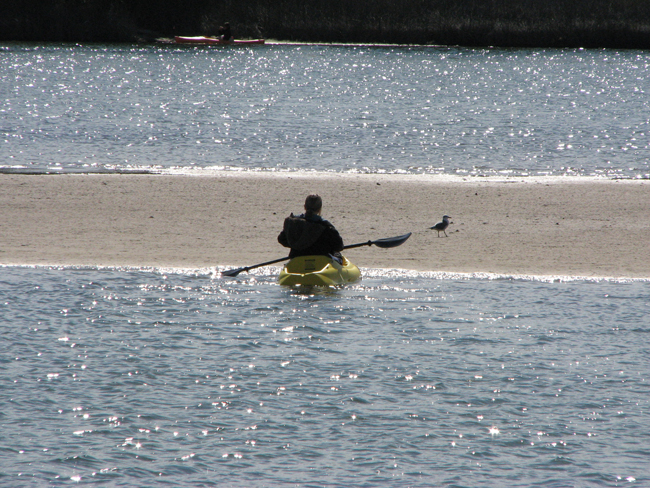 Logan on the hunt for hermit crabs.

It didn’t take her long to pick one out and it indeed needed a new shell. The best part is that I finally got her to smile for the camera. 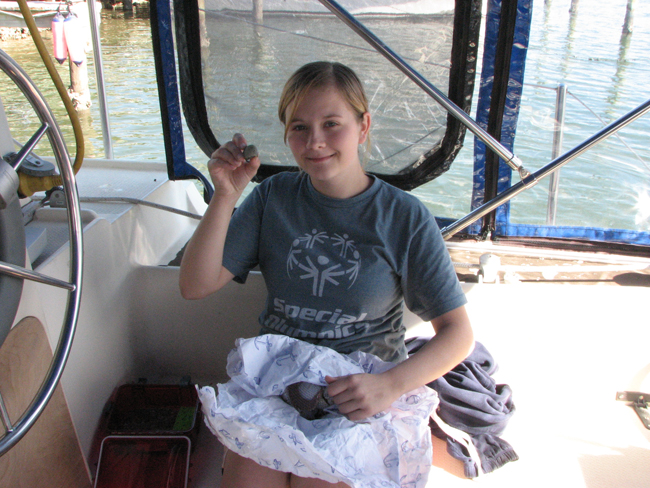 Logan and her new pet, Peanut Butter the hermit crab.

The small town of Carrabelle is surrounded by Tate’s Hell State Forest comprised of over 202,000 acres. They were conducting a controlled burn in the forest which filled the sky with huge clouds of smoke. This made for a really cool sunset. 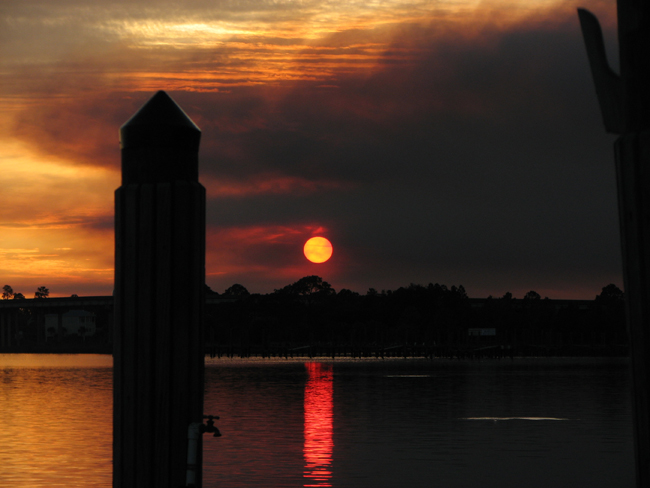 On the second night in Carrabelle we cooked crawfish bisque for dinner as I had brought with us some frozen crawfish tails from Louisiana. It was a new recipe that I was eager to try out and it turned out to be delicious (Thanks for the recipe Carol).

As you can see I’ve reduced the size of pots I use but still seem to cook enough for an army. We bagged some up and shared with our neighbors on s/v Wand’rin Star and still had lots left over to freeze. 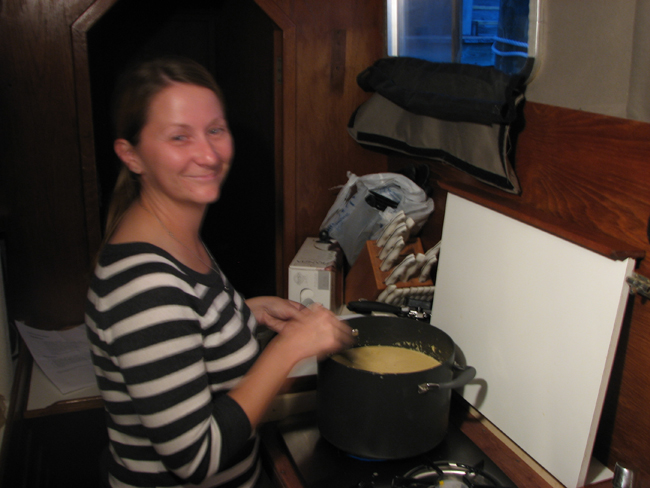 We stayed in C-Quarters Marina for a week waiting for a weather window until finally things were looking up. On Sunday we moved out to anchorage at Dog Island. From here we will move on to Steinhatchee early Tuesday morning.

As we made our way from the Carrabelle River to Dog Island we came across a pod of Dolphins. I saw them coming so I was already at the bow with the video camera when they approached. If you listen carefully you can actually hear them communicating.

Dog Island is located about 3.5 miles offshore from Carrabelle. It is approximately 6.8 miles in length and is only accessible by boat, plane or ferry. Half the island is protected by a nature conservancy and the other half is privately owned. There are no stores and no paved roads but they do have a landing strip for small aircraft.

Dog Island is a beautiful place to anchor, kayak and go for a ride in the dingy. We motored over to the island to take a walk across to the gulf side. 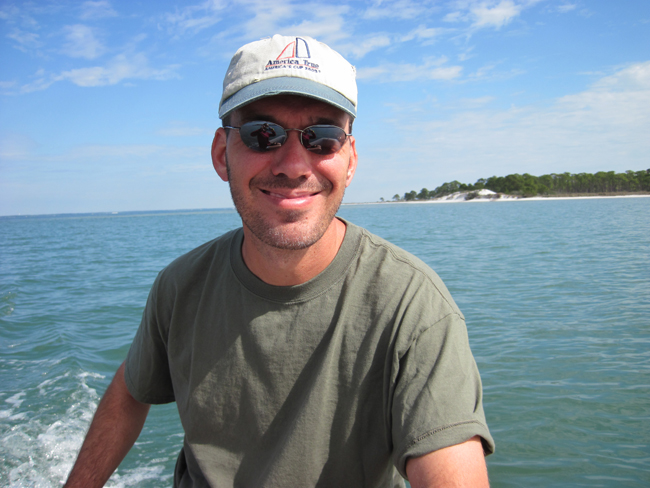 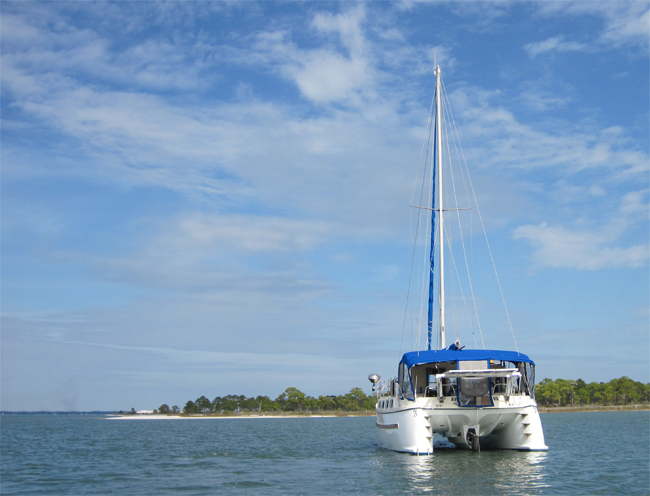 The island has a small marina for the residents and a loading dock used by the ferry. The ferry makes several trips a day transporting passengers back a forth from Dog Island to Carrabelle. This appears to be a vessel used to transport vehicles to the island. 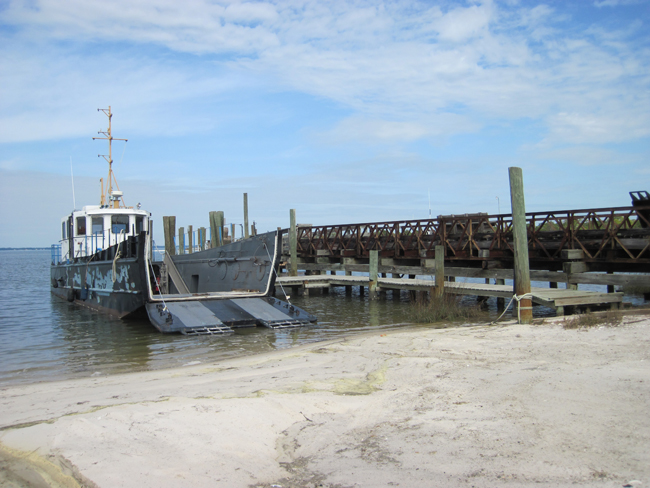 The Dog Island Airport is basically a clear strip of land down the middle of the island. I’m not sure I would be comfortable landing at an airport posted “Land At Your Own Risk!!” 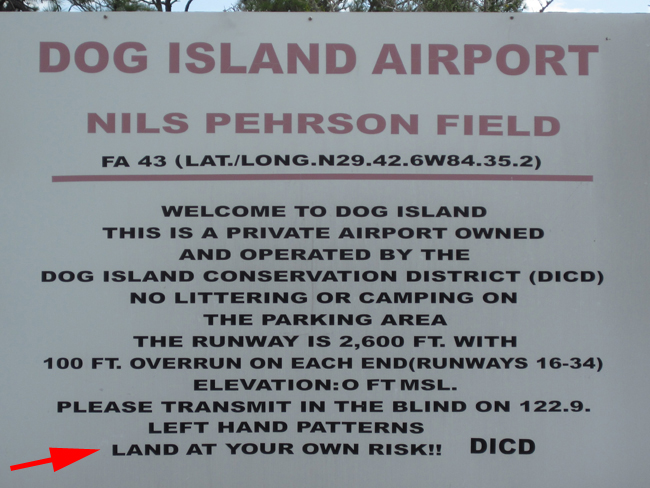 Dog Island Airport "Land at your own risk!!" 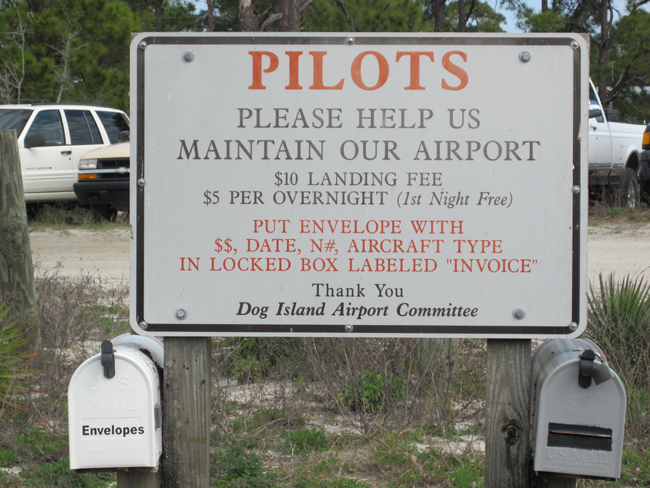 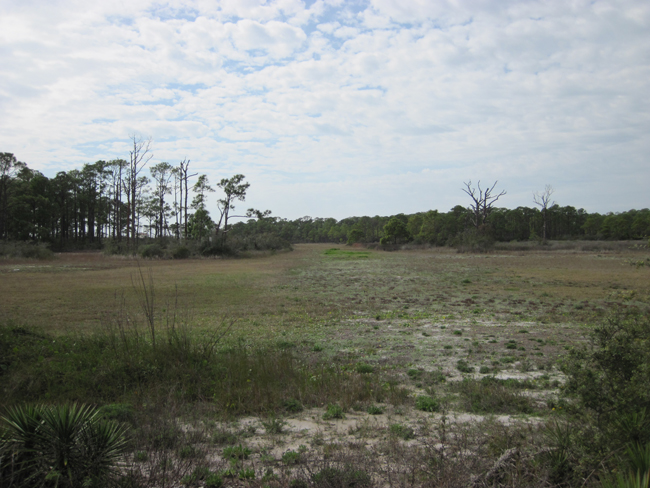 The beach on the gulf side of Dog Island was full of sea shells of all shapes and sizes. We walked along the water for a while collecting shells as we went.

Some places were difficult to walk without stepping on shells. 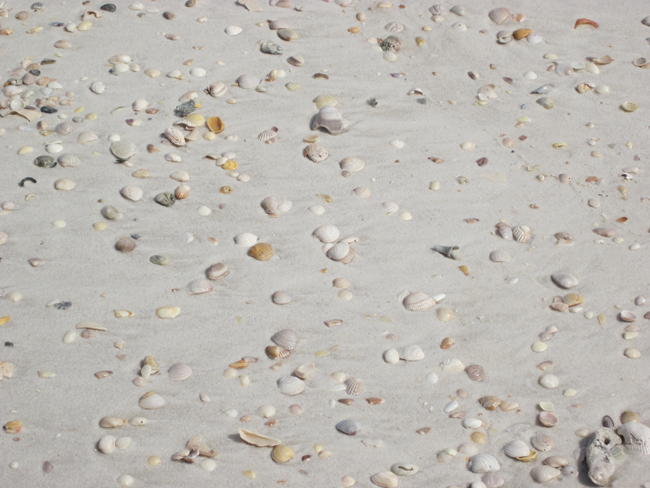 Shells on Beach at Dog Island

Tuesday came and our weather window closed on us. The conditions were not favorable for a gulf crossing so we made our way back to Carrabelle to wait it out a little longer.

3 thoughts on “Apalachicola to Carrabelle and Dog Island”