It was time to do a little repair work on the decks at the Swamp House.  The buoyancy of the lower decks, being submerged by the extra waters brought in by Hurricane Isaac, separated some sections of the pier. 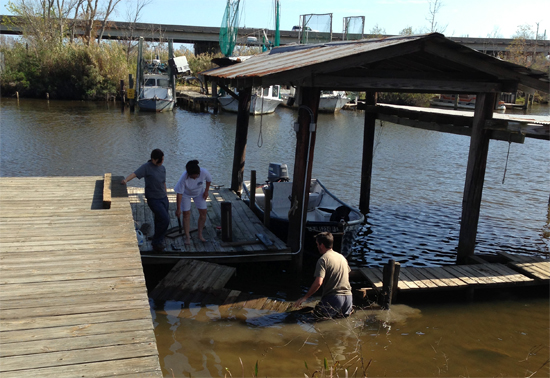 I was told that this was a great time of year to work in the swamps because the gators and snakes are hibernating.  I have never heard of alligators hibernating and since I was the one they were trying to convince to get into the water.  I was very skeptical.

I am not an alligator expert, but I must admit, I hadn’t seen many gators around lately.  Usually, at any given time, we can look into the swamps and see a couple of these large reptiles.

It was time to quit being a candy-ass, so I put on the long rubber boots that came up to my crotch and happened to be two inches too short for the water depth and filled with water immediately.

I tried to focus on the work but the thought of those damn gator never left my mind.  I gathered 4×4 posts that were laying about and tried to organize our building material.

Cindy was standing on the deck as I remained waste deep in the swamps as we discussed how we planned to reconstruct this pier.  I unknowing loosened a post that was buried under the water in the soft mud.  It slowly began to float and work itself to the surface right next to me.

The post broke the water’s surface in a gator like fashion, at which point I almost added a little fudge to my underpants as I proceeded to do a reenactment of walking on water.

Cindy, watching the whole sad episode could only laugh hysterically and wipe the tears from her eyes.

Fortunately there is no video.