“I love talking about nothing. It is the only thing I know anything about.”
~Oscar Wilde 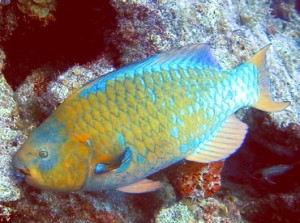 There are things you learn in life that you wish you didn’t know.  And sadly, much like the first time you heard your parents having sex, you can’t erase it from your brain.

Today I learned that that the parrotfish poops sand.  I’m not making this up.  This fish chomps on small critters attached to the coral reefs.  These fish end up with a belly full of coral inside them which they excrete out at some later time as sand.  Roxanne witnessed this first hand.  She was swimming behind a group of parrotfish when one produced a sand cloud.  She stopped following them at that point.

Every parrotfish produces 250 lbs of sand every year and there are a lot of parrotfish out there in the water.

So the next time you are relaxing on a nice beach on a beautiful day, just remember, you’re sitting on a large pile of parrotfish shit.

I learned that tidbit of information from Tim the dive master.  Tim was explaining to us, at our last stop on the snorkel tour, to swim out to this white buoy and drift back about 50 ft and there we would find Jesus Christ.

I couldn’t help but think that a lot of people are looking for Jesus, maybe Tim should blog about this.

I was curious so I had to ask, “Jesus is underwater?”  Tim replied in a strong Jamaican accent, “Yea mon, but don’t worry Jesus can hold his breath for a long time.”

A cracker from West Virginia who sounds like a Jamaican telling jokes about Jesus, that alone was worth the price of the tour.

He further explained that the city sank an eight foot bronze copy of the statue, “Christ of the Abyss” in 20 ft of water off Key Largo.  The hordes headed straight for the statue, Roxanne and I headed for the uncongested waters of the reef where we could see things that weren’t made out of metal or by man.  We get enough of that on land.

The beauty of the Florida Keys has nothing to do with the Keys themselves but with the surrounding waters.  The cities and towns have no personality or identity, and how could they?  The local population is ever changing as drifters and paradise seekers come and go with the tides.

There is a folklore expectation of the Florida Keys.  An undeserved reputation for being paradise that is propagated by the overworked battalions of American workers who dream of the good life.

“At least I live in paradise”, were the words that were spoken in a self convincing tone over and over again from the transplanted locals who are trying to tell themselves that they found the happiness they were so desperately looking for.

But they were not happy and the thin veil of their words could not hide their deep and utter disappointment.  Paradise does not exist here.

The Florida Keys are like any other destination, they are what you make of it.  The snorkeling, fishing and diving are fantastic.  There are more bars and tiki huts than you can count and everybody makes a fantastic cheeseburger.   Key West is fun and it reminds me a lot of Bourbon Street in New Orleans.  Just a cleaner and much safer version.

And to say the Keys have no personality may not be totally correct.  They do things in an interesting way down here.  After ordering our lunch at the counter the lady asked for my favorite song.  Over the loud speaker you could hear them call out the titles to classics like Frank Sinatra’s “My Way” and an older couple would stand to get their food.  I had to laugh when I heard the loud speaker blare out, “Baby Got Back, your order is ready.”  It occurred to me that my wife’s name is also the name of a song, so I simply told them, “Roxanne”, though I wish I used Rusty McHugh’s song, “She Put a Louisiana Lip Lock On My Alabama Pork Chop.”

In the end, I find it difficult to summarize the Florida Keys and that’s mainly because that everything worth seeing down here wasn’t created by man.  The clear waters and the living reefs make this place an aquatic playground.  With 100s of islands that stretch a 100 miles out into the ocean, it is a paradise for those who are willing to jump on a boat and toss off the lines and leave the islands behind to enjoy the beauty of the surrounding waters.

3 thoughts on “The Florida Keys”