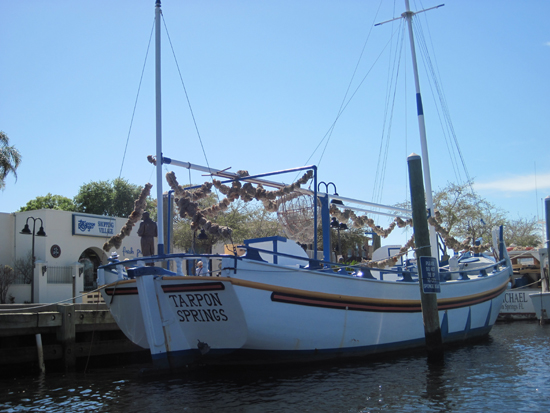 On a nice spring day in 1902, Young Nikolas stood naked on the side rail of the boat like he had done hundreds of times before.  A large bag around his neck, a rope tied to his waist and a 30 pound flat stone held high above his head.  His friend is staring through a wooden bucket with a glass bottom, which he holds partially submerged in the water, to aid him in viewing the sea floor.

Nikolas gets the signal.  He plunges head first into the blue waters still holding the flat stone out in front of him. The water glances off of the stone as he uses it like a rudder to guide his decent through 100 feet of water down to the ocean’s floor.

He yanks the large sea sponges from their rocky homes and places them in his bag.  He works as quickly as he can and after a couple of minutes he reaches for his waste and finds the attached rope and gives it two sharp tugs.  The deck hands receive the signal and pull Nikolas up to the boat as fast as they can.

This was a good dive.  Better than last week when Nikolas wisely sacrificed his flat stone by tossing it into a sharks’ open mouth and then quickly gave his rope to sharp pulls and ascended to safety.

These were the safe years of sponge diving.  Little did Nikolas and his fellow divers know that sponge diving would soon become the most dangerous occupation in America.

Tarpon Springs Florida, from the outside, looks like any other coastal Florida town.  You will pass the large marinas that always seemed to be spaced apart perfectly.  Large waterfront houses that fill you with envy and a slight hint of relief that it’s not yours to pay-for or maintain.  And a sprinkling of commercial vessels along the shoreline, most of which show the scares of a life of hard work.  But this is just the books’ cover; it’s not until you get off your boat and visit the Sponge Docks that you start to understand that Tarpon Springs is different.

There is a disproportionate large number of Greeks in Tarpon Springs.  According to the latest census, 12% of the Tarpon Springs population reported having Greek ancestry while 8% of the families reported speaking Greek in their homes.

As with most things, there is a reason there are a lot of Greeks in Tarpon Springs.

In the early 1900s, large fields of sponges were discovered in the Gulf of Mexico, off of the coast of Tarpon Springs to be exact.  With the advent of the synthetic sponge, that really doesn’t mean anything to us today.  But back in the early 1900’s natural sponges were very valuable.

But there was a problem, there is always a problem before vast riches can be achieved.

The sponges lived at seemingly unobtainable depths.  It wasn’t widely known but there were a group of people that were already experts in sponge diving.  The Greeks.  The Greeks had been diving for sponges for over 50 years, so logically, they were recruited and transplanted to Tarpon Springs to work the newly discovered sponge fields.

The good wages and the apparent endless fields of sponges brought an ever increasing number of Greek families to Tarpon Springs.

But there were dark days ahead for the sponge divers.

The days of skin diving(diving naked) were over.  The newly invented deep sea suits were being used.  Compressed air was fed down to the divers via a hose that screwed into a large brass helmet.  Now the divers could work at greater depths and for longer times.

But little was known about decompression sickness and the bends.  Much like opening a bottle of soda, bubbles will come out of a liquid and float to the top when the pressure is released.  Unfortunately as the divers surfaced and the intense water pressure on their bodies was reduced, bubbles of air would come out of their blood leading to pain, paralysis and death.

To say sponge diving was dangerous is an understatement.  Even as late as the 1950’s and 1960’s when decompression sickness was understood, the mortality and paralysis rate averaged about 5% each year.  1 out of every 20 sponge divers died or was permanently paralyzed every year.

I don’t know about you, but I don’t like those odds.

The sponge industry is no longer the leading industry in Florida.  It doesn’t even make the top 10, but the Greek influence on Tarpon Springs is alive and well.  Even today you can walk down the streets and hear the Greek language as it fills the background of your ears like pleasant music.

Greek restaurants flourish everywhere as they serve flaming cheese appetizers and scream “Opa!”, when it is brought to your table.  I still don’t know what that word means but it is fun to say.  The broiled octopus is heavenly and they entertain their customers with live Greek music and belly dancing.

There are sponge shops galore and if you have never used a natural sponge, well you just may want to buy one.  The soft silky feel of the Rock Wool sponge has never been duplicated by its’ synthetic counterpart and is sure to make your wife a very happy woman.

For more information about the Sponge Docks of Tarpon Springs visit: