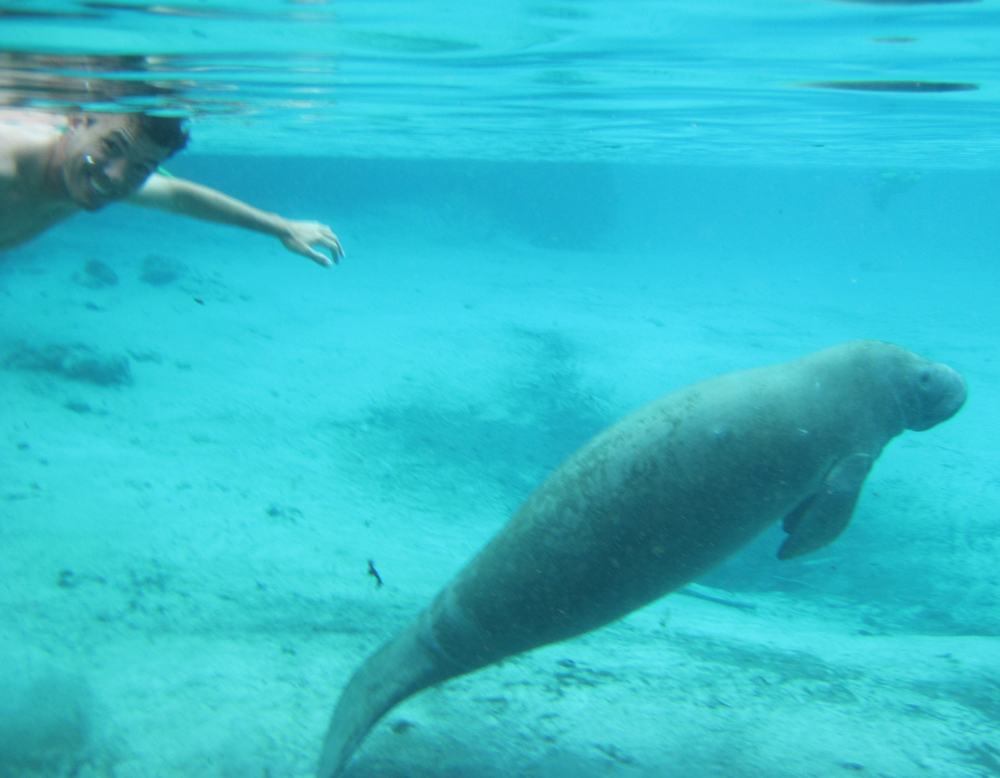 Kings Bay is infused with 64 million gallons of crystal clear, 72 degree water, from over 50 different natural springs every day. The water travels slowly west, out of Kings Bay and through the 7 mile long Crystal River, where it becomes part of the Gulf of Mexico. And, this area happens to be the home to over 500 West Indian manatees.

How could we possibly resist a visit?

“Where ya’ll from?” I’m not sure how, but bartenders have a way of sniffing out tourist. After a couple of miles of a lazy walking tour through Crystal River City we decided to pop into this cool looking Irish Pub for a break. Actually, I don’t know why, but all Irish Pubs tend to look cool.

We ordered a couple of cold beers and I answered, “We’re from Louisiana.” He just smiled in a, “I don’t really care fashion”, so I followed up with, “Is there a good place on Kings Bay where we can ride the manatees?”

The bartender just gave me a blank stare and then chuckled and shook his head in a disapproving way, “They don’t let you ride the manatees, but if you want to see them you should visit Three Sisters Spring.”

He pulled out a map and showed us where to go and continued, “You have to get there early or it will be utter chaos.”

I find that bartenders are better than Google for local knowledge.

“First light, like before sunrise early. And be careful, there is a group of volunteers that watch over the manatees and makes sure that no one is harassing them.”

“So no riding the manatees.”

He chuckled again, “That will probably get you a $500 dollar ticket.”

As it turns out, there is a large group of volunteers, mainly retired folk, that wear lime green vests that either educate you about the manatees or just scream at you for some violation.

There are many rules that you must follow if you wish to avoid the scorn of the volunteers, to include no poking, prodding, riding, surrounding, disturbing or chasing of the manatees.

The last rule should give you an idea of how slow these mammals move. Think of all the different animals in the water. How many of them can the average human swim fast enough to actually chase?

Not very many, but manatees are one of them. They are simply large underwater cows that spend their days eating grass from the waters floor. A lot of grass actually. Each manatee will consume up to 10% of its’ body weight in grass each day. Considering these animals weigh up to 1,500 pounds I’m surprised there is any grass left for these monsters to chomp on.

In 1977 the Crystal River Nuclear Plant began operation. This is only interesting because nuclear plants discharge warm water into the surrounding estuaries. Manatees love warm water and soon discovered Crystal River. It wasn’t long after that, that they swam up into Kings Bay and discovered all the fresh water springs that produce 72 degree water year round.

Despite the manatees large size they are very sensitive to cold water. Evidently if it gets too cold they have digestive track problems. So the manatees seek out warm waters and hang out. Crystal River is now home to over 500 manatees and the number appears to increase every year.

And people come from all over the globe to swim with these creatures. The multitude of languages spoken at Three Sisters Spring would make you think you were at a United Nations barbecue.

“It was soooo majestic.” I heard a lady tell her friend after they completed a “Swim with the Manatees” tour.

“Majestic?” I’m not certain about that. It’s about as majestic as standing next to a cow and watching him chomp on a bale of hay.

But it is very cool. Manatees are very large docile creatures that evidently fall into the, “they are so ugly they are cute” category. It’s an exhilarating experience to be able to swim with these large mammals as they lumber around and eat grass. They are curious animals and often times will swim right up to you, within inches of your face. They will exhale and then take a deep breath before heading back to the waters floor for more food. I can personally vouch for the fact that manatees do not have puppy breath.

In 1980, according to a federal study, there were about 30,000 people who came to view or swim with the manatees in Crystal River. That number increased to 100,000 in 1998 and after watching tour boat after tour boat pass by our stern, even on cold rainy February days, I firmly believe that number has doubled or tripled.

But the number of visitors is becoming a problem. As it turns out, manatees have a hard time being intimate with so many people watching. Evidently they like some privacy when they are trying to get their manatee groove on.

Surprisingly the constant attention from humans floating with them reduces the number of offspring and is therefore more damaging to their population than collisions with boats or cuts from propellers.

It appears that the ever growing popularity of swimming with the manatees is going to be the cause of the whole operation being shut down by the federal government.

On our way out of the Irish Pub, I thanked our bartender for all of his great advice and information. When we reached the door I turned back and asked, “Oh yeah, are there any good restaurants around here where we can get a good manatee steak?”

The bartender just smiled and said, “Yep, Cellblock C of the Federal Pen.”

I hear their Zagat rating is really low, I think we’ll pass.