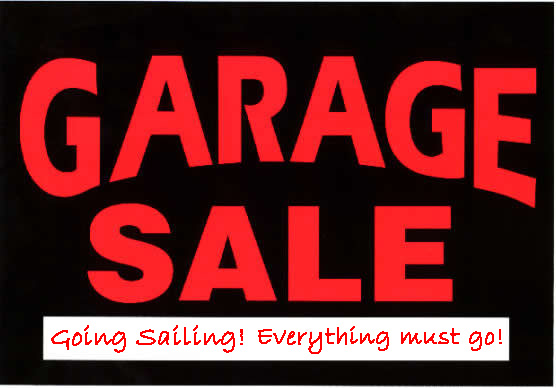 “A house is just a place to keep your stuff while you go out and get more stuff.”
- George Carlin

Bellies full from a nice dinner from one of our favorite chain restaurants we pull into
our subdivision when Roxanne, my wife, excitedly blurts out, “Big Sign!” My daughter and I chuckle as I ease the car over to the side of the road and stop in front of the sign to give Roxanne a chance to read.

My wife loves big signs. But not just any big sign. She has no love for billboards or banners but she will never miss a chance to read a sign at the entrance to our
subdivision.

These signs typically announce a “Hay Ride” during Halloween or a “Group Turkey Fry” for Thanksgiving. Yes, down here in Louisiana, we make an event out of frying our Turkeys. According to the big sign there were going to be 15 fryers this year. Evidently a record.

This sign announced the yearly subdivision garage sale. Thinking out loud I said, “Perfect, this will be a great time to sell all of our stuff.” We need to offload 10 years of
accumulated stuff/crap before we go sailing.

Roxanne flashed a smile of vindication. Big signs are obviously worth reading.

The day before the garage sale, Logan and I busied ourselves with cleaning up the front yard and emptying out the vast warehouse that we call an attic.

Jim our friendly neighbor makes his way over, talking as he crosses our yard, “Participating in the garage sale this year?”

“Yeah, we have lots of stuff to get rid of” I reply.

“You know that people are going to arrive at 5 in the morning.”

“But the big sign said the garage sale starts at 7.”

Jim laughed and shook his head in a sympathetic manner, “These aren’t normal people
you are dealing with. These are garage sale people. They will be here at 5am, with flashlights, going through all of your stuff.” He added mockingly, “These people don’t really abide by times posted on big signs.”

Jim freaked me out a bit and I was getting a little nervous about these “Garage Sale People.”

Roxanne spent most of the night putting prices on everything as Logan, our teenage daughter, and I hauled our stuff into the front yard.

As the night continued a mountain of stuff grew in our yard. I found it amazing and interesting at all the stuff we owned. We had accumulated so much, that I couldn’t remember buying some of this stuff. Evidently, I didn’t need it or use it very often.

My friend Mike sends me a text message, “Are you selling your router?”

I reply, “Already sold it to Webb.”

“Do you mind if I ask how much you sold it for?”

“Hey knucklehead! Those were my router bits!”

I had no idea that those router bits weren’t mine. I didn’t really know what to say at that point so I decided to state the obvious, “What do you need router bits for, you don’t own a router.”

Mike didn’t speak to me for three weeks.

All the good things that we owned were already sold to family, friends and co-workers. Most of them can’t fathom why we no longer wanted a 52″ plasma TV or a surround sound system.

A curious co-worker asks, “What are you going to do without all of your stuff?”
I had answered this question a hundred times to a hundred different people, “You don’t really need all of that stuff. We are sort of becoming minimalist, you know, doing more but having less.”

That answer attracted nothing but hollow blank looks that will be forever imprinted on my brain. It was the look of someone who had completely changed their opinion of you, and not for the better. Who could blame them? Rich beautiful people live in large luxurious houses while unabombers and serial killers live in small shacks with no television.

Our choice of lifestyle is not an envious one.

Going sailing requires a massive reduction in your possessions. It forces you to ask the question, “Do I really need this?” Walk around your house and ask that question and you will be surprise at how often you say, “No.”

Garage sale people are different. Yes, they were at my house at 5am rooting through our stuff. I was now wishing I had taken this stuff to the dump instead of standing outside on a cold dark Saturday morning watching these over ambitious garage sale junkies get their weekly fix.

A lady shouts at me from across the yard, “I’ll give you 50 cents for this” as she holds up some piece of junk we priced at $1.00.

Trying my best to be civil, “Lady, I don’t have quarters on me, I can’t make change.”

“I don’t think I can pay a dollar for this.”

I think I saw the same lady pull up in a Mercedes Benz, “Ma’am, I’m sorry but I don’t have change.”

I really didn’t know what to say at that point.

I did eventually get into the garage sale spirit. I would look around for the largest item we had that was in the absolute worst condition and try to sell that.

I put on my best P.T. Barnum and Bailey imitation as I announced to all new arrivals in a rather loud and obnoxious way that, “Everything must go!” “One day only sale!”

I sold a large box of old ceramic tile to an elderly lady by promising her that someone would carry them to her car.

“But I’m parked around the corner.” She said.

“No problem, Logan will be happy to carry that for you” I replied.

I think she was a bit surprised to find out that Logan is a young female that weighs about 110 pounds. She looked up at me and then down at this young teenager who was grunting as she struggled to lift the heavy box from the ground.

She looked back at me disapprovingly, “I think she needs some help.”

“Naw, she’s fine” as I restrained any embarrassment. “Lift with your legs kid, not with your back.”

It took a while and my best Billy Mays (infomercial pitchman with beard and blue shirt) impersonation to sell a rusty old mountain bike. I had to throw in a free tire pump and car rack to get rid of that ugly bike.

“Ok, I’ll buy it” said the reluctant purchaser. He continued, “I have a few more garage sales to go to, can I pick it up later?”

“Sure, no problem. I’ll leave it here in the front yard for you.”

Two weeks later and the bike is still sitting in our front yard. I think the guy paid me $5 just to leave him alone.

I spoke to a lot of people that morning. Usually, I initiated a conversation by trying to sell something to an unsuspecting garage sale person. They would often reply, “No thank you, we have too much stuff.”

We don’t own much stuff anymore. The majority of our belongings were carried away by an army of garage sale people. And yet, even though it has been weeks, I haven’t found myself lacking anything.