“Money can’t buy you happiness but it sure doesn’t make you sad.” 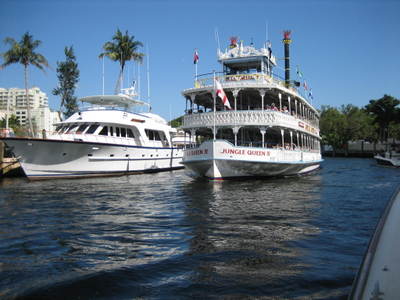 I don’t know any rich people.  I mean the overtly wealthy types.  But now I find myself surrounded by them and I can’t help but stare, as if they were animals in a zoo, in an enclosed area and I was standing on the outskirts marveling at this wild creature.

Roxanne and I made our way up the New River which will take you to downtown Ft. Lauderdale where they have city docks that are priced just within our budget.  We cruised up the river, passed the appropriately named Millionaire Row, an extravagant stretch of the river with obscenely beautiful houses lining the banks.

The millionaires in this town don’t own 50 or 60 foot yachts but 120 to 150 foot mega yachts.  These mini cruise liners tower before you and seem to be just narrow enough to pass down the river without scraping their sides on the seawall.  Needless to say, there isn’t much room left on the river for anybody else.

We nervously made our way up river, just praying and hoping we could get to the city docks without having to share the river with one of these behemoths.  Our docks were in sight, just south of the draw bridge.  Roxanne was poised on the front of the boat and I was sweeping the boat out wide to get us lined up with our boat slip when we heard the siren on the bridge sound and it began to open up.  On the north side of the bridge was a gigantic vessel, large enough to eclipse the sun and cast a shadow down upon us.  I screamed through the open window to Roxanne at the bow of the boat, “Holy shit, do you see how big that damn thing is!”

Roxanne screamed back, “What am I blind, what are we going to do!”  We were on the wrong side of the river, preparing for our docking and now I needed to get out of the way.

I hollered back, the diesel engine always requires hollering during docking, “Hold on, we’re going to come in fast!”

I throttle up and aim our boat for our rectangular parking spot which is bordered by a beautiful 40′ yacht to the left and very solid wooden piers to our front and right.

We were going way too fast.  I slammed the boat in reverse upon entering the boat slip, the diesel engine was screaming loudly and spewing a cloud of smoke, Roxanne and I were hollering as we tried to maintain control of the boat as it danced and wiggled in reaction to my heavy hand on the throttle and then it happened.

Bamm!  We slammed into this beautiful 40′ yacht to the left of us.

Honestly I find it rather amazing that after all these years this is the first time I have hit another person’s boat.  There have been a couple of close calls during my life.  Back in 2003, in-between two other boats, I tried to parallel-park my 30′ long boat in a space that was only 28′ long.  There was a lot of hollering and diesel smoke in that instance also.

I’m not even going to mention the British Virgin Islands incident.  All I know is, I can’t ever go back to that fuel dock again.

A rather unhappy older couple from New Zealand came flying out of their boat to see what in the hell was going on.

I thought this would be a great time for us to introduce ourselves.  I looked over, “Hi I’m Conrad and this is my wife Roxanne and we’re from Louisiana.”  Not to be rude I continued, “Where are ya’ll from.”

They looked at each other with the troubled gaze of, “What in the hell is wrong with these two?”, but realizing they neither had the answer they just resigned to their fate.  They were going to have to deal with us.

Two days later I hear a loud knock on our boat.  There really is no front door so if someone wants your attention they just knock on your boat three or four times.  There stood our new friend with his left arm extended straight out from his side.  I said, “Hi Phil, how are you doing?”

No reply, he just stood there with his arm extended, starring at me.

I was a bit confused and then it dawned on me, “Is it 5 o’clock somewhere Phil?”  He smiled broadly, looked at the watch on his left arm and said in the always cool sounding New Zealand accent, “It’s 5 o’clock here, come on over for some beers.”

And that’s how we became friends with the New Zealanders.